The Geology of the Moon

This map was one of my favorites, so I’m excited to share the code tutorial for a geologic map of the Moon! Although I already made a geologic map of Mars, this Moon map was much more difficult because the geologic data was split into six different datasets. Each dataset had unique labels (and sometimes different data formats) so I spent a lot of time piecing the data together to create a cohesive map. 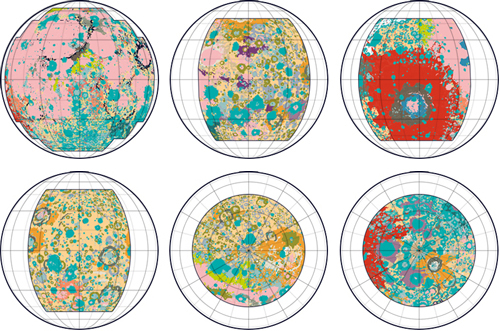 One complication with having six datasets instead of one was that some geologic categories were described differently in each dataset, like “Basin Material, Rugged” vs. “Material of Rugged Basin Terrain”. So I decided to combine closely related terms into a single color.

This Moon data was also challenging because the geologic timescales weren’t very precise. Some areas were described with uncertainty - like plains from the “Imbrian or Nectarian” era. And some geologic categories combined many time periods, like craters from “Imbrian, Nectarian, and pre-Nectarian” time periods. I thought it was too complicated to show all these uncertain aggregations in one map, so I decided to omit timescale data entirely. The map features are colored only by geologic category (craters, basins, etc.) and not by age. 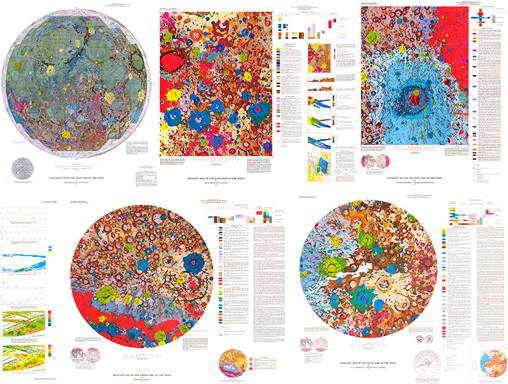 The original maps were originally published in the 70’s, and I loved the bright neon color schemes in these historical maps. I tried to keep as many of the same colors as possible, though I re-arranged to save the more extreme colors for smaller or more unusual geologic formations.

The end result is a summarized geologic map rather than a precise replication of the original data. But even though I combined geologic features and didn’t include precise scientific labels, I think the map still works in its limited role as a condensed overview of Moon geology. 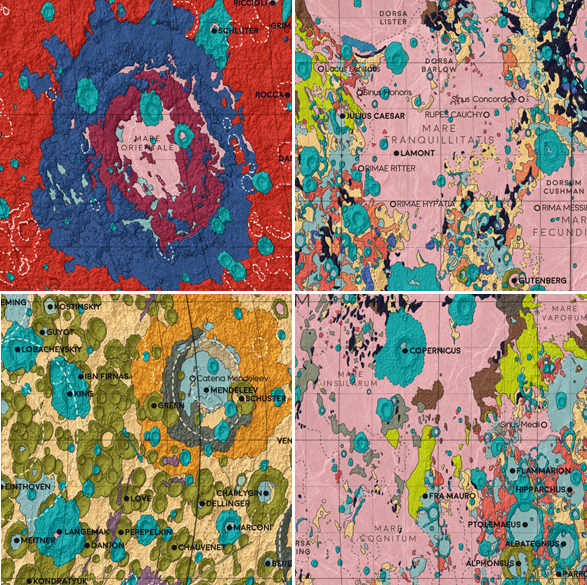 This map is actually the last installment in the Atlas of Space series. I love working with astronomy data and I’m sure I’ll make more maps in the future, but for now I’m taking a break to try and finish my last PhD research project. Thanks for all of your comments and suggestions this summer - I really enjoyed getting to share these maps with you! For those of you going to NACIS meeting this fall, I’m looking forward to talking more about these maps at the conference in the Using Open Data panel. Hopefully I’ll see some of you there!