A Topographic Map of the Moon

My next two maps in the Atlas of Space series show the topography and geology of the Moon. These were some of my favorite datasets in the project - the Moon is our closest celestial neighbor, and we know a lot more about the Moon than about our neighboring planets. The Apollo missions even returned several hundred kilograms of lunar rock to the Earth for detailed analysis.

The moon is tidally locked to the Earth, which means that it completes one rotation around its axis in exactly the same time that it takes to circle around the Earth. Because of this, the far side of the moon is never visible from the Earth’s surface. This topographic map shows the near side of the moon in the large central map, as well as the North pole, South pole, far side, and interior in the four surrounding maps.

People have been fascinated by the moon for thousands of years, and lunar events like the full moon or an eclipse are tied to ancient calendars, myths, and celebrations. The lunar cycle can even be seen today in the pattern of Google searches for the word “moon,” which peaks predictably during every full moon. 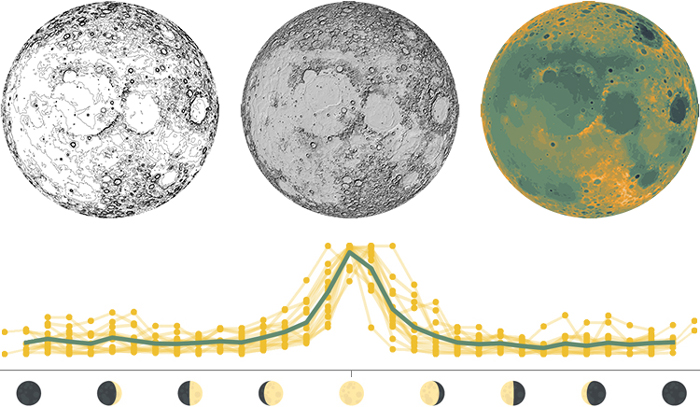 1: Data layers used to design this map. 2: Google search frequency for the word “moon” in the United States (data from Moon phase dates and Google Trends). Each yellow line shows one lunar cycle in 2018, normalized to the highest and lowest value within each lunar cycle. The turquoise line shows the overall mean.