A galaxy of molecules

May 16 2017 · A collaboration with Nerdcore Medical

This week’s infographic is a metabolic map - a diagram of the chemical reactions that turns food into energy. The “galaxy of molecules” illustrates only a small fraction of the full metabolic map, but it includes some of the most common pathways taught in undergrad biochemistry or medical school. The project brief was to collect each of these major pathways into one resource that could serve as both a study guide and decorative poster.

I have a hard time picturing very small things (like molecules) and very large things (like galaxies), so I’ve always felt that they occupy a similar conceptual place in my head. I thought it would be fun to play off of that idea and illustrate extremely small molecules in the visual style of extremely large star clusters.

I actually designed this almost two years ago as one of my first collaborations with Nerdcore Medical. So this was a good opportunity to publish something with a few year’s worth of perspective. I think if I were to redo this poster today I’d try to add a little more distinction between each atom in the key. It’s difficult to make something visually interesting as well as easy to understand, and I think this particular style might have fallen too far on the visual side. But still, this is probably the most scientifically challenging infographic I made for Nerdcore Medical, and I’m happy with how it turned out.

The Goddesses of Venus: A topographic map

Almost exactly a year ago I published the Medieval Map of Mars - a topographic map of Mars that shows the etymology of each named feature. This year I decided to continue the series by making a map of Venus that explains the etymological origin of each landmark.

Features on Venus are named after women or female mythological figures. The three exceptions are Alpha Regio and Beta Regio (named after letters in the alphabet) and Maxwell Montes (named after the Scottish physicist James Maxwell). All three were named before this convention was adopted by the International Astronomical Union, and Alpha Regio is the only one visible in the area covered by this map.

Sketching ideas for icons while waiting for the bus. I tried to pick symbols that had some meaning - a droplet for water goddesses, dice for goddesses of fate and luck, and four dividing cells for fertility goddesses.

One of my favorite things about extraterrestrial maps is the international mix of assigned names. The International Astronomical Union clearly makes an effort to represent many diverse cultures when naming planetary features. I thought the ancient goddesses were particularly interesting because they hinted at what might have been important to each culture - like the Philippine volcano goddess Darago and Adyghe beekeeping goddess Merisa. Large craters are named after famous women, and I was happy to see a lot of names I recognized (Beatrix Potter, Rachel Carson, Virginia Woolf).

Venus is the hottest planet in our solar system. The surface is hot enough to melt lead, with an atmospheric pressure more than 90 times that of Earth. Lander robots sent to Venus have never survived longer than a few hours on the surface. However, many of these landers sent back valuable data before being destroyed. Each landing site is marked by a seal describing the mission name, date, and time spent on the surface before destruction.

Living with fire: Surviving the forest wildfires of California

March 1 2017 · Featured in the March issue of Wired Magazine

California wildfires can cause devastating damage to property and human lives. But for plant species that have lived for thousands of years in the fire-prone Sierra Nevadas, forest fires are an expected part of the natural environment. These species have unique adaptations to withstand fire - and some even depend on fire to survive. This infographic introduces six different California plant species, all with different adaptations to fire. 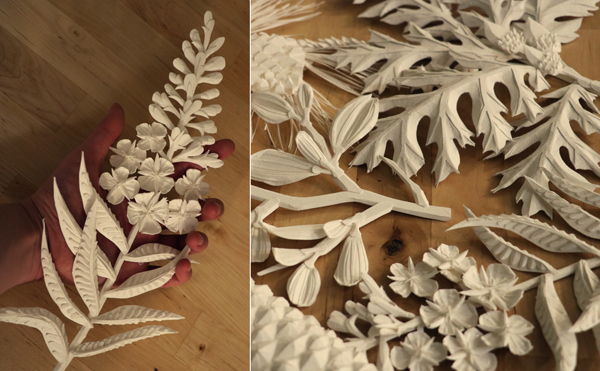 Each of the illustrations were made with watercolor paper & Elmer’s glue. The fireweed design I’m holding took almost 8 hours to make:

To make this infographic I first made all of the plants out of white watercolor paper and Elmer’s glue. Then I borrowed a camera and tripod from my university, and set everything on fire with a purple Bic lighter. By incorporating real flames into this infographic, I wanted to emphasize the important role of forest fires in the life cycle of these plants. I edited these videos in Photoshop to make a continuous looping animation of each burning paper sculpture.

The white paper designs don’t include details like flower color or exact leaf size. But my goal for this infographic was to share the general principles of fire ecology using these plants as interesting examples. Since I wasn’t making a plant identification resource, I decided to use a more artistic style that skips some of the information found in traditional field guides.