Constellations from Around the World

To make this map I used data from Stellarium, an open-source planetarium software that includes constellations from ancient Dakota, Hawaiian, and Mongolian cultures, among many others. Some of my favorite constellations were the Stars of Water, Rabbit Tracks, and the Hippopotamus, and I also really liked the star names The Oath Star, Lady of Life, and The Hand of the Mouse. 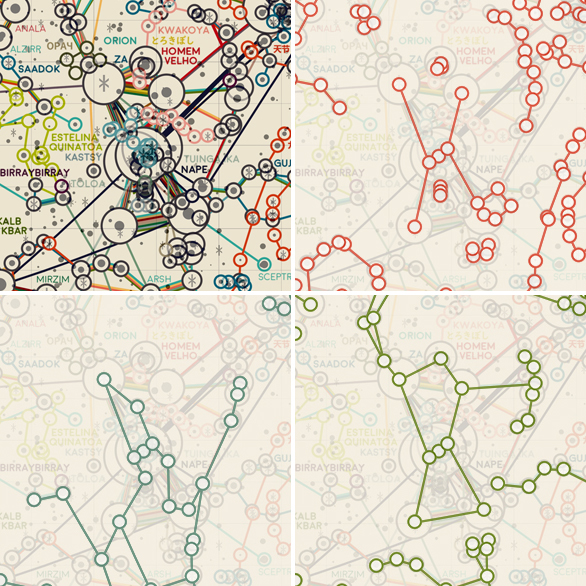 The stars around the Western constellation Orion are one of the busiest places on the map. Some of the individual cultures are highlighted here, including the Chinese constellations in red, ancient Egyptian in turquoise, and Arabic in green. I really liked that each of these cultures included the triple stars in “Orion’s belt”, but still interpreted the star patterns in a completely different design.

The color scheme for this map was inspired by antique roadmaps, like this map of Nebraska from 1898. But this is the only map in the series without a dark background, and I wasn’t quite convinced that a lighter background could work for a star map. I even made two different versions before finally deciding to stick with the original color scheme.

I originally wanted to label the constellations in each culture’s language, but the translations for Stellarium are an ongoing process (that you can help out with, by the way!). I did the best I could by including Chinese labels, which were already fully translated in Stellarium, and by adding phonetic ひらがな labels for Japanese moon signs (I speak Japanese).

This map was definitely one of my favorite designs. At first I was worried that with so many constellation lines, the map would look like a tangled ball of yarn. So I was pleasantly surprised to see that the “ball of yarn” still had a clear pattern - the brightest stars were shared across almost every single culture across the world. I’ll admit that the final map is probably a little too busy to clearly see the individual constellations. But in the end I think the charm of this dataset is seeing the crisscrossing connections shared across the globe, even if the lines are a little entangled.